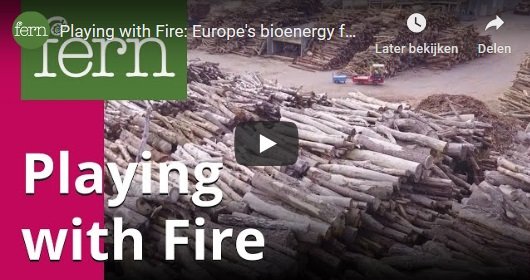 The legal mandate to record forest biomass-fired energy as contributing to the EU’s renewable energy targets has had the perverse effect of creating a demand for trees to be felled in Europe or elsewhere in order to burn them for energy, thus releasing the carbon into the atmosphere which would otherwise stay locked up in the forest, and simultaneously drastically reducing the carbon sink strength of the forest ecosystems.

This legal document contains the main arguments in the EU Biomass Legal Case where the applicants seek annulment of the inclusion of “forest biomass” – essentially
trees, including, stems, stumps, branches and bark – as a renewable fuel within the
Renewable Energy Directive (recast) 2018.

"...In January 2018, EASAC wrote directly to the President of the European Commission to warn, “The legal mandate to record forest biomass-fired energy as contributing to the EU’s renewable energy targets has had the perverse effect of creating a demand for trees to be felled in Europe or elsewhere in order to burn them for energy, thus releasing the carbon into the atmosphere which would otherwise stay locked up in the forest, and simultaneously drastically reducing the carbon sink strength of the forest ecosystems…"

"...The potentially very long payback periods for forest biomass raise important issues given the UNFCCC’s aspiration of limiting warming to 1.5 °C above preindustrial levels to ‘significantly reduce the risks and impacts of climate change’. On current trends, this may be exceeded in around a decade. Relying on forest biomass for the EU’s renewable energy, with its associated initial increase in atmospheric carbon dioxide levels, increases the risk of overshooting the 1.5°C target if payback periods are longer than this..."

"...EU Regulation (EU) 2018/841 (“the LULUCF Regulation”) comes into effect in 2021, building on the UNFCCC’s reporting approach and aiming to evaluate carbon flux in the land sector on an equal or nearly-equal basis with carbon in other sectors. However, as above, all modelling scenarios constraining global temperature rise to no more than 1.5 °C rely on both a very large increase in carbon uptake, and significant reductions in emissions. Accordingly, simply balancing carbon uptakes and losses (through meeting the FRL) is not enough..."

"...Given the steep reductions in atmospheric carbon loading required, even scenarios that maintain or slightly increase the carbon sink are insufficient. 33. Despite that, the EU promotes the LULUCF Regulation as the means of accounting for emission from biomass combustion for produce energy. It argues that the “no debit rule” (as explained and considered further below) will ensure that those emissions are compensated for elsewhere if emissions occur in the LULUCF sector from harvesting biomass for energy. This approach overstates the degree to which bioenergy emissions are counted in the land sector because it relies on the FRL perfectly accounting for all emissions from harvesting. However, this is not the case…."

"...Thus, claims that the LULUCF Regulation will account for biomass carbon losses are only partially accurate, because they do not acknowledge that biomass burning is treated as having zero emissions if a Member State is meeting or exceeding its FRL target. Yet ton for ton, burning wood that would otherwise be stored or added to a forest increases carbon in the air by the same amount, even if a state is meeting its FRL target.."

"...regions of the US Southeast that supply the wood pellet industry do not have laws requiring that forest buffer strips be maintained along rivers. Clearcutting of bottomland hardwood forests and thin to non-existent buffer strips contribute to flooding and water quality degradation..."

"...Bioenergy is expected to be the single largest source of new wood demand in the near future, and this is anticipated to drive expansion of pine plantations at the expense of both agricultural land and natural forests of comparatively high biodiversity value. In addition, the conversion of bottomland hardwood forests (often wetland habitats) to pine can involve significant losses of belowground carbon..."

"...As explained..,the Directive’s claim that the GHG Criteria, the Sustainability Criteria, and the LULUCF Criteria ensure that biomass burned for energy reduces emissions relative to fossil fuels is simply wrong. As a result, insofar as the Directive results in the expansion of energy from forest biomass (one of its stated aims), it undermines its own purpose of reducing GHG emissions, violates the TFEU Article 191 Treaty obligations and infringes the fundamental rights of the Applicants..."

- The renewable energy targets and the legal obligations to meet them;

- The definition of renewable energy, such that it includes biomass;

- The method of calculating the share of energy produced from renewable

sources in Article 7 is mandatory, meaning Member States have no discretion

to omit energy produced from forest biomass from this calculation;

- The GHG criteria are mandatory, such that Member States have no

discretion to account for biogenic emissions when calculating the impact of

the use of forest biomass;

- The sustainability criteria in relation to biofuels and bioliquids produced

from forest biomass are a regulatory ceiling (see Article 29(12)), such that

- There are no possible sustainability criteria for biomass fuels that could

- Member States cannot impose additional LULUCF criteria even the most

onerous of which is inadequate to prevent harm. The Member States thus have

The Reputational & Financial Risks of Investing in Forest Biomass Energy

This briefing document, a collaborative effort by Environmental Paper Network, Biofuelwatch and Global Forest Coalition, sums up the reputational and financial risks involved with investing in forest biomass energy. “Reputational risks stem from the growing awareness and body of evidence showing that forest biomass is far from being a low carbon or even carbon neutral energy source. […] Reputational risks can translate into financial risks given the high level of dependence of this form of energy on public subsidies. Failure to fully disclose environmental, social and governance (ESG) risks in portfolios exposes financial institutions to regulatory risk.”

“The failure to fully disclose environmental, social and governance (ESG) risks in portfolios exposes financial institutions to regulatory risk. Similarly, failure to meet new requirements on the inclusion of ESG risk criteria in due diligence and risk weighting forms a regulatory risk for investors.”

“Financial institutions are also exposed to legal risks as they can be held accountable for the impacts of their investments and for breaches in fiduciary duty from failure to integrate ESG risks.”

This Vox-article discusses how it came to be that Europe’s banking on biomass to meet their obligations under the Paris agreement is causing forests to be felled in the US (and elsewhere) and how large scale deployment of biomass for energy is in fact failing to meet any carbon reduction targets at all.

“Under the terms of the Kyoto Protocol, the forest owner, not the end-user of wood products, is supposed to account for the carbon lost when a forest is cleared. The US, thanks to George W. Bush and a late-game lobbying effort by the fossil fuel industry, isn’t part of the Kyoto agreement, which means that it is not bound to keep track of emissions from forest loss.”

EU Dragged to Court for Backing Forest Biomass as RED

This article, which was published early march 2019 on www.earactiv.com, reports about a group of plaintiffs from Estonia, France, Ireland, Romania, Slovakia, Sweden, and the US, filing a lawsuit against the European Union to challenge the inclusion of forest biomass in the bloc’s renewable energy directive. The group argues that EU institutions have failed to take account of scientific evidence showing that forest biomass harvesting and combustion for energy purposes exacerbates climate change by causing deforestation outside of Europe.

“The plaintiffs contend that including forest biomass as a source of renewable energy runs counter to Article 191(1) of the EU treaty, which stipulates that the bloc’s environment policy shall contribute to: “preserving, protecting and improving the quality of the environment…and in particular combating climate change”.

This report of the Dutch Government discusses the legal (international /national) framework in which the logging and burning of woody biomass is to be placed.

"...A legal basis is concluded that there will always be a gray area under current legislation. Certainty about this is ultimately only possible through a court decision.
Example: Wood chips from energy forests are not waste, because they are the intended product of the energy plantation. Cutting prunings (also in the form of chips) from municipal parks does provide a waste material. Wood production is not the intended purpose of the municipal plantings; the wood chips come from maintenance work. The The municipality must dispose of these residual materials and that is one of the criteria used determined that something is a waste..."

European framework directive on waste
"...For biomass transporters and traders, it is not always clear which permits and documents are required for the transport and storage of biomass. Currently being viewed on the way in which the European Waste Framework Directive can be designed to tackle the bottleneck apert clean biomass (especially woody biomass)..."

We have collected and read all the research reports and official documents from the past decades and have started to make summaries for each subject and published the summaries on the following pages:

We are analyzing reports and creating & posting new summaries every day. This is time consuming work but we will try to deliver multiple summaries per day. We are currently processing reports from 2019 and will work our way back into the hundreds of official research reports commissioned the last decade.